Get Your Revs Up This Summer! 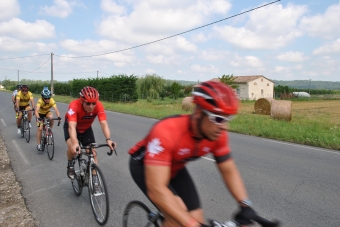 The month of May was spectacular for riding. We hope you have taken the opportunity to cumulate miles on the saddle before summer kicks in. What are your plans for June 26-28 weekend? Come celebrate with us during the Summer Solstice weekend in Niagara. Get your revs up riding the Niagara Escarpment, sipping wine, indulging on local cuisine and chill'n at the live outdoor concert with no one else then the Jim Cuddy Band and several other featured artists. A party in the vines with friends.  That sounds risky.

Looking for a challenge - there is still time to book (and train) for our Signature Trip following the Tour de France riding alpine stages and culminating on the Champs Elysées. July 21-27 jump onboard for a week of riding legendary;Col du Telegraphe, Col du Galibier, Alpe d'huez, Col du Glandon, and few more. We'll head to Paris to celebrate your exploit and as well the Tour grand finale.

On a more personal note, the amazing Mattamy National Cycling Centre velodrome has opened up last January and Steve has been spending most of his days overseeing the first 4 months of track programs. It was a frank success. Participant numbers surpassed all expectations. The velodrome is now closed for the upcoming Pan Am and Parapan Am Games kicking off early July in Toronto.  Steve will have the immense privilege to be a torch bearer and carry the torch on his bike in Milton on June 23rd.

Give us a shout or drop us a line.  The coach will sign you up.